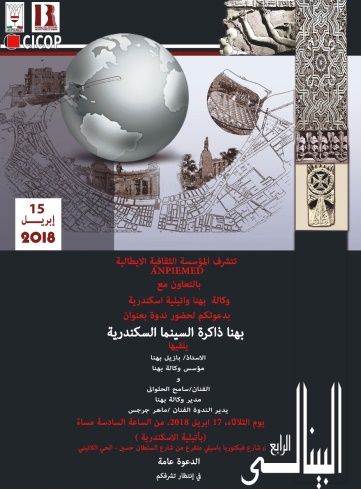 The seminar hosted Basil Behna president of Wakella Behna cultural Center, & Sameh Elhalawany the director to talk about the Bahna Company as memory of Alexandrian cinema. Bahna Company is one of the first companies of film production and distribution in Egypt, practically in Alexandria. Founded in 1930 by Bahna family, one of the immigrating family from Mosul to Aleppo, then settled in Alexandria early 20th century, they first engaged in tobacco trade, then left it to cinema production and distribution. They produce a large number of Egyptian films during 1940s and 1950s, but the company was nationalized in 1961. Later the company went bankrupt and closed, till the heir of Bahna family Basil succeeded after forty yours in courts, to obtain a court order to regain his father’s company, he is currently working on the restoration of his family’s cinematic heritage. The seminar organized within the ANPIEMED program of the International Biennial BRAU4 in ALEXANDRIA.